When buying Doberman puppy, most people pay attention on their colors. Keep in mind that some people may discourage you against some colors. They claim that certain colors are unhealthy.

Did you know that the color of your Doberman has an impact on a dog’s health?  Let dig deep on more Doberman coat colors discussed below

How Many Colors Of Dobermans Are There?

It is worth mentioning that different people have different opinions when it comes to Doberman colors.  Some people may be talking of five colors while others only know of three colors. Well, there are four main Doberman colors especially pinschers. They include blue, red, black as well as fawn Doberman to mention but a few.

Most breeders are keen when it comes to choosing colors because they believe that certain colors have specific traits.  Did you know that some of these dogs are more affectionate than red dogs? Quite a number of these puppies are loving, loyal and hard working.

We must attest that these dogs are available in variety of colors. Some look alike and only have tiny difference. Take your time and learn more about the colors.

What Is The Rarest Doberman Color?

According to the American Kennel Club, Fawn Doberman is the rarest color of the four main breeds.  Many people refer to this color as Isabella. Its rareness makes it more expensive than others do. Moreover, its appearance is amazing.

Before we jump into the different types of Doberman colors, if you are a huge Dog colors enthusiasts, you may want to check out

Did you know that there are two genes in the Doberman as far as color is concerned?  We have a black gene as well as a color dilution gene.

It is worth mentioning that AKC also recognizes white color though not as a standard color.

Doberman colors chart is a vital tool for all the buyers who wish to explore more colors.  This tool consists of different dog samples of variety of colors.

They come in single page, color matching as well as in form swatch books. If you are buying your puppy for the first time and you are not sure of the colors, then this tool will guide to the right color for your Doberman.

Let us learn more of what Doberman colors chart contains:

Isabella Doberman as many refer to it is the second common type of coat colors of dog breed.  Regardless of the common color, it is crucial to mention that this is also the rarest breed in town. It is also one of the two colors recognized by both FCI and AKC.

It’s a widely spread color following the fact that most breeders believe that it can be accepted in most show rings thus wining confirmation titles.

The rich red color is unique and amazing in any Doberman’s breed. It displays their smooth, hard as well as thick and beautiful coat. Many people come up with craziest and funniest names for colors that are easy to describe.  Most people use “chocolate” name to describe reddish brown tone.

There are also breeders that use other terms such as bronze, chocolate among others names to describe different types of coats.

Did you know that black and rust is the most common type of breed in the USA and Europe? It is an amazing color for most dog breeds such as Beaucerron, Rottweiler, German Pinscher and Bernese Mountain dog to mention but a few.

Is the black Doberman rare?

Many aspiring breeders are asking themselves whether the black Doberman is a rare breed or now and how they can own one.

Based on different breed standards, block Doberman without markings are not desirable and should not appear in any breeding program. Well, many people also argue that you can identify outlines of the tan markings in most Black Dobermans under right and direct sunlight.

Blue Doberman is one of the four main colors acknowledged by the AKC though not by European standards. Most breeders avoid this breed just for the above reason.

In simple reality, the blue colors exist after the impact of the dilutive gene that gives the black a bluish look.  Blue Dobermans may not appear exactly blue as you may think. The bluish color can be sensed only from afar.

Did you know that Dobermans that are blue as well as silver have color dilution alopecia? This genetic skin condition causes dry dog skin, hair loss among other issues.

Many people like the blue as well as silver touch in their Doberman. It is crucial to note that most breeders crossbreed with others dogs with similar coat colors and in turn sell them as ‘Blue Doberman’.  That is why it is vital to ask for DNA tests to avoid the above raised issues.

Note that the blue colored Doberman exits and thus it is not a fantasy color.  It is unlike the Blue Cane Corso that has correct labels of gray. If you are a new breeder, it is advisable that you do a lot of research regarding the same and make sure that you are only taking pure Doberman and not crossbreed.

Are you considering getting a Doberman pinscher? It is crucial that you understand all the types as well as colors that exist. It is also advisable that you learn a number of their traits to you make the right decision.

There are seven possible colors of the Doberman pinscher. Six and fully recognized by most people while the full albino may exist in theory.

Albino dogs are rare types and only a few people believe that they exist.  Most people are still not able to differentiate the white ones from albino Doberman.

There are two main genes in the Doberman. That is the black bene as well as the dilution gene. The two genes produce the four main Doberman colors.  According to most breeders, certain pinscher colors seem to have particular traits.

Did you know that Doberman colors black &rust are the most common color combination ever seen? It is also one of the most traditional colors of Doberman.

Moreover, whenever you see the name “Doberman” the depicted breed in movies as well as television is always this color.  It appears shiny and sleek; you would definitely fall in love with it.

Doberman colors are also known as red, Isabella as well as cinnamon. It is a diluted red. Colors fawn normally confuse most breeders and without keenness, they end up choosing the wrong color.

Dobermann colors red & rust are available in a range of colors from a lighter copper-like tone to a dark chocolate tone.  Other people also refer to this color as a light brownish-red color. According to most reports, this breed has unique traits such as:

Red and rust Doberman is a common variety of this breed.  Every three Doberman you meet, you must have said hello to a red and rust one.

Their coat colors range from dark brown to light brown. At times, they are chocolate. We also refer to their breed as chocolate Doberman.

Most people confuse rust Doberman with brown. Their difference is quite small. These breeds have amazing traits according to their breeders.

Did you know that blue and rust Doberman is rarer than black and rust?  It is the only accepted standard color for the American variety.

Keep in mind that it can be a disqualifier in some dog shows. No wonder most breeders avoid the color making it less frequent in the market

Tan Doberman may be rare in the market though most people do not realize it. They look exactly like chocolate or light brown Doberman.

They are intelligent, loyal and alert. When taken care of properly, they make a caring and a loving companion.

All black Doberman is a unique color   with amazing traits.  Did you know that it is the loyalist of all the companions? They have the sharpest minds as well as a level of unseen devotion.

If you are looking for Doberman puppies to rear, you can always contact All black Doberman through its website for more information.

Isabella Doberman is popularly referred to as fawn Doberman.  It appears as a diluted red color.  For instance, a blue Doberman would appear as a dilute black.  Did you know that the blue Doberman is sometimes referred as gray as well as silver Doberman?  The gray color may appear silver, charcoal and sometimes it quires a purple tone.

It is worth mentioning that the albino Doberman is a mutated gene that is yet to be identified in the Doberman pinschers. Currently, there are many scientific studies on skin, hair as well as skins by leading universities across the world.

Read  How To Leash Train A Puppy? 3 Best Ways To Leash Walk Puppy

Albino Doberman appears white in color and they have red mouth and nose. They look beautiful and they possess amazing traits.

Most breeders take white Doberman for albino Doberman. According to research, white Doberman are all-albinistic and not leucistic.  They argue that albinism is a spectrum that has more than seven forms as well a several subtypes. In simple reality, the white Doberman is scientifically a type of a positive albino.

Many white advocates are not in agreement with quite a number of the researches. They claim that the white color is just like any other Doberman Colors and should not be treated as albino.

Are you looking for red Doberman puppies for sale? Well, before you find one, it is advisable that you carry out a background check on Doberman breeders in town and choose an ethical one. Keep in mind that many breeders in town thus choosing the right one may be challenging

A good Doberman breeder primarily breeds the puppy to improve its breed. A good breeder ensures that their puppies are placed in a good home.  Remember that the puppy price will vary from one breeder to another based on their requirements. 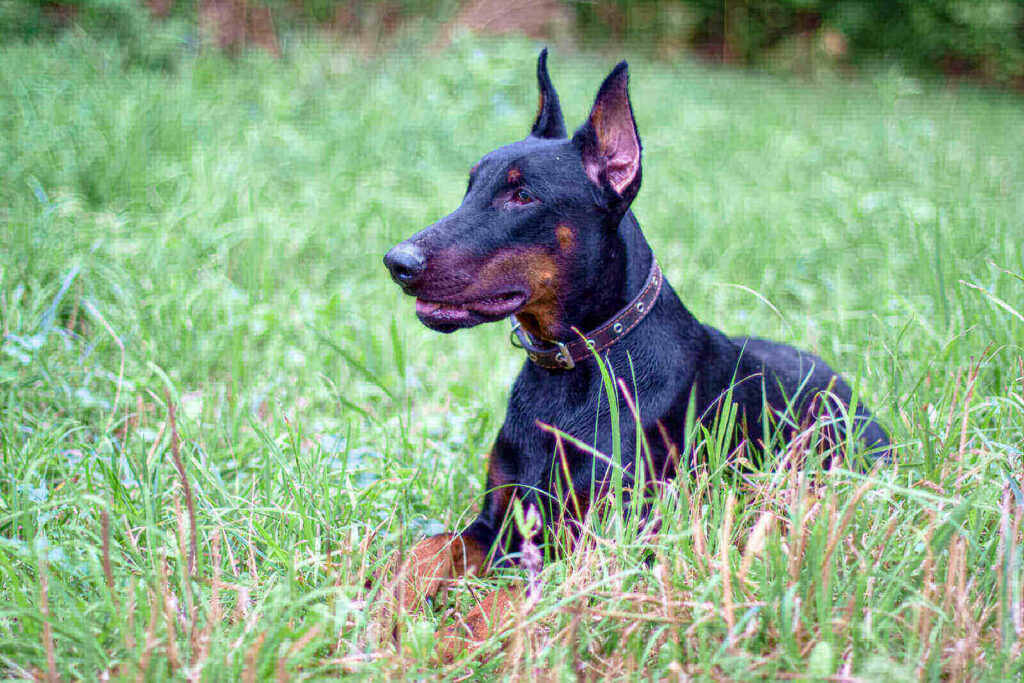 In the previously mentioned points, it is clear that there are four acceptable Doberman colors in America.  They include black, red, blue and fawn.  In other parts of the world such as Europe, only black, tan, red and rust Doberman would meet the standards. In Europe, they refer to red Doberman as brown.

It is worth mentioning that Dobermans are one of the best dog breeds across the world.  They have a unique appearance; they are loyal, fierce, loving and hard working.  They make up the best companions.  Did you fall in love with one of the colors from the list? Well, it is now your turn to start arranging on how you can bring your Doberman home.

Even though a lot of work may be required, after bring a Doberman home, you will enjoy value for your money and energy.